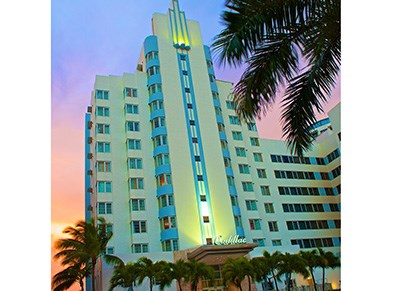 While the Cadillac name has long been associated with luxury, most notably within the U.S. auto industry, the name had a similar connotation with a certain hotel in Miami Beach in the 1940’s. Hersha Hospitality Trust acknowledged as much by making a substantial investment to bring back the iconic beach property at 39th and Collins Avenue.

The Philadelphia, PA-based REIT acquired the Courtyard Cadillac Miami Beach/Oceanfront in 2011. The original hotel was designed by Art Deco architect Roy France and opened in 1940. The revamped hotel—which has been closed since September—is expected to open in the coming weeks as the Cadillac Hotel & Beach Club, part of Marriott’s Autograph Collection.

Neil Shah, President and COO of Hersha Hospitality Trust, noted that the company considered keeping the hotel open throughout the repositioning but in the wake of Hurricane Irma ultimately decided to shut it down and “focus on getting the renovation done.” The roughly $40 million makeover included a full renovation of all bathrooms, guestrooms, corridors, and doubling the size of the meeting space, among other things.

Shah pointed out that the property performed well as a Courtyard, but noted the company identified the potential for a change when it made the initial investment.
“We were acquiring it as a Courtyard hotel and we felt like that was a good current use. It provided really good cash flow in the first five or six years of our hold, but we felt like this was a forever piece of real estate and a really distinctive historic building. We felt over the long run that we would be able to reposition the asset as a higher end, close to luxury, kind of hotel experience,” he said, further adding, “we thought with this location and the bones of this hotel we could position it one star set higher.”

Nevertheless, Shah acknowledged that shutting down the hotel for several months was not an easy decision for the company, which has roughly 50 hotels in its portfolio, including several in the South Florida area.

“It’s very disruptive. For us it’s a very significant hotel in our portfolio and to take it offline for this long was a big commitment. It was a successful hotel as it was. But since the market had slowed down it gave us an opportunity so we took it and then the hurricane gave us even more of an opportunity to shut it down and fully focus on upgrading each part of it,” he said.

According to Shah, the new hotel draws its inspiration from the glamour and sophistication of the 1940’s European Riviera. As such, interior design firm Bill Rooney Studio set out to create a reimagined modern resort with a preserved Art Deco aesthetic.

The three-building property features 357 guestrooms, including 20 suites, as well as two distinct dining outlets, two pools and beachside service. Hersha built an additional 93-room oceanfront tower in 2013. Shah added that since the building is relatively new the FF&E and finishes will merely be refreshed to integrate the design with the rest of the hotel.

The lobby has kept its classic signatures with original terrazzo floors, lush greenery and a wraparound mezzanine balcony overlooking the check-in and lounge area.
Guestrooms are complemented by radiant white stone floors with Art Deco inspired articulation, flattering ambient lighting and subtle gold and smoky blue accents, according to the company.

For corporate meetings and social events, the hotel will offer a Miami Beach backdrop. Several flexible indoor and outdoor meeting and event spaces include a high-tech and high-style boardroom and a ballroom that opens onto an expansive pool deck.

Shah noted that the company is expecting to be able to increase daily rates in the range of $50 to $60 as a result of the renovation. However, he noted that’s “only part of the story” when it comes to its return on investment.

“There’s also unleashing all of the food & beverage opportunities throughout this property. The restaurants and bars will also become major contributors of earnings to the property,” he said. Shah further detailed the expectations, “We think that the property can achieve 20 to 30 percent higher EBIDTA than it has in prior peak performance.”

He further touted the potential impact of the two full-service restaurants, a traditional Italian trattoria and a venue which will serve fresh coastal fare. “We’re really hoping the restaurant and outdoor bars will become kind of a fixture among locals in Miami Beach,” said Shah.

The company’s portfolio includes a handful of other Autograph Collection hotels, including the Envoy in Boston. Shah noted that both HHM (Hersha Hospitality Management), which will manage the hotel, as well as Hersha Hospitality Trust, are bullish on the soft brand from Marriott. “HHM has had good experience with Autograph and we as owners have had great experience with Autograph in a bunch of locations,” he said.

Shah stated that the Miami market peaked in 2014 and 2015, but added there has been a “noticeable deceleration” in the years since. He attributed the “choppy” market to several factors, including reduced international travel as a result of the strong U.S. dollar, but primarily to the closing of the convention center for renovations.

However, Shah maintained the company’s overall outlook on the market remains very positive. “Long term we think of Miami across a 10- to 15-year horizon as one of the highest growth lodging markets in the world. We think the dynamics and the fundamentals of this marketplace are really strong for the next decade…We really have great conviction in Miami. We think when the Convention Center reopens at the end of this year we’ll start to see some meaningful acceleration in the marketplace,” he said.